Along its mission to engage with the many talents from its global network, One Block Down is proud to reveal its latest collaborative editorial with digital magazine Sabukaru. Based in Tokyo, Japan, we have connected with the ever-evolving platform to bring our audience closer to an endless catalogue of unique cultural learnings.

Known for colorful and mystical motifs, traditional Japanese tattoos are loved all over the world – except for the Japanese people. While foreigners flock to tattoo artists versed in Japanese iconography, its homeland still feels more than uneasy about this art form, forcing the few tattooed natives to cover up to be perceived as valuable members of society.

It was only last year that Japan’s Supreme Court recognized it as an art form and finally ruled that it is not illegal to tattoo without a medical license, thus reverting a 2001 law by the conservative LDP government. Yet, even in 2021 it seems more likely to win the lottery than to see an average white-collar office worker openly flaunting a tattoo on the subway. Ironically enough, the Japanese tattoo tradition has been threatened by imports of Western morals just as much as foreigners have helped to keep it alive, spreading it over their bodies and all over the world. 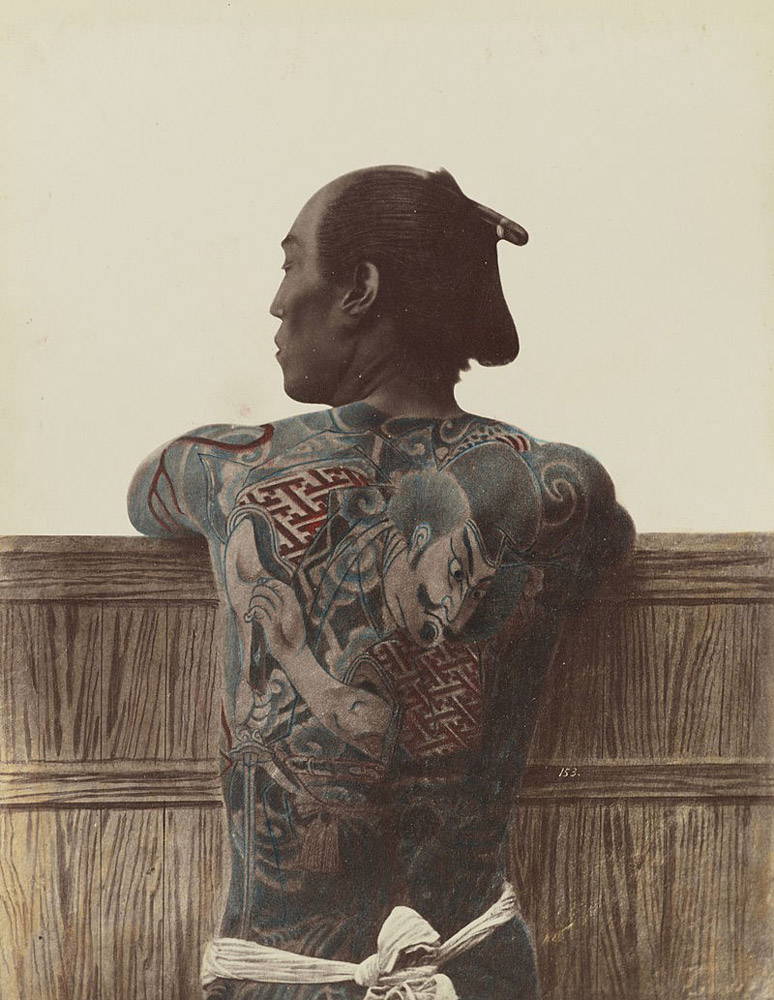 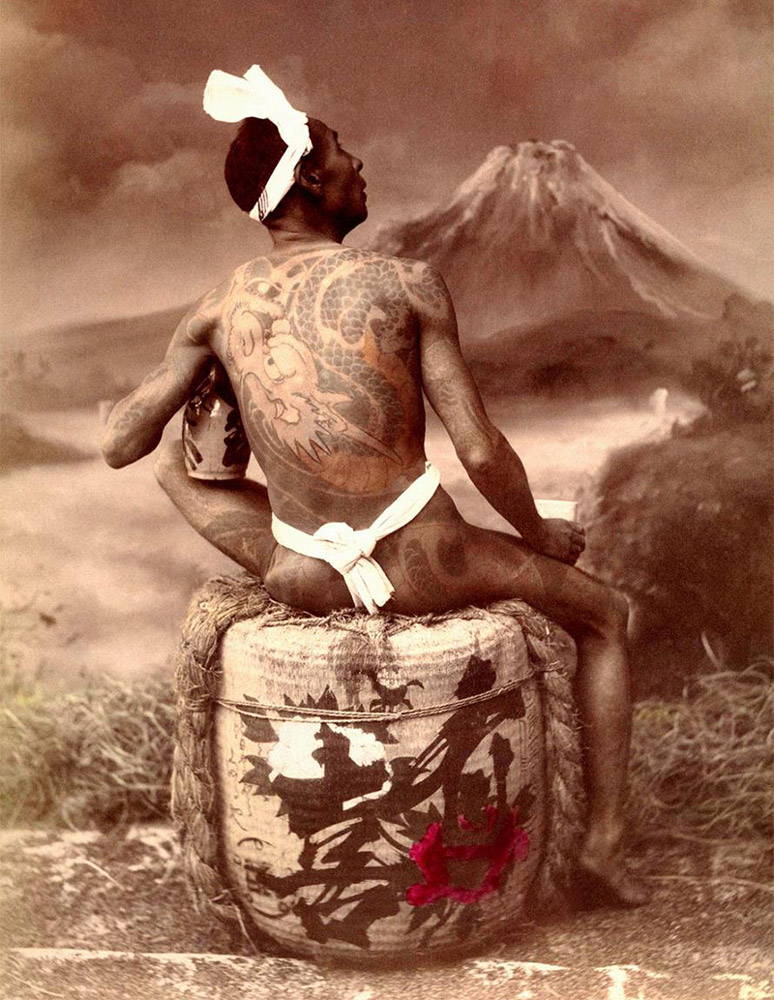 When Japan’s extensive exchange with the West began in the 1860s, the country already had developed two radically different strings of tattoo history. On the one hand there were local and later nationwide penal systems using distinct black ink patterns (penal irezumi) to brand petty criminals. This practice was most strongly enforced after the Tokugawa Shōgunate’s advent to power in 1603, unifying the country and bringing more than 200 years of peace – as well as wealth and debauchery to a growing urban population. 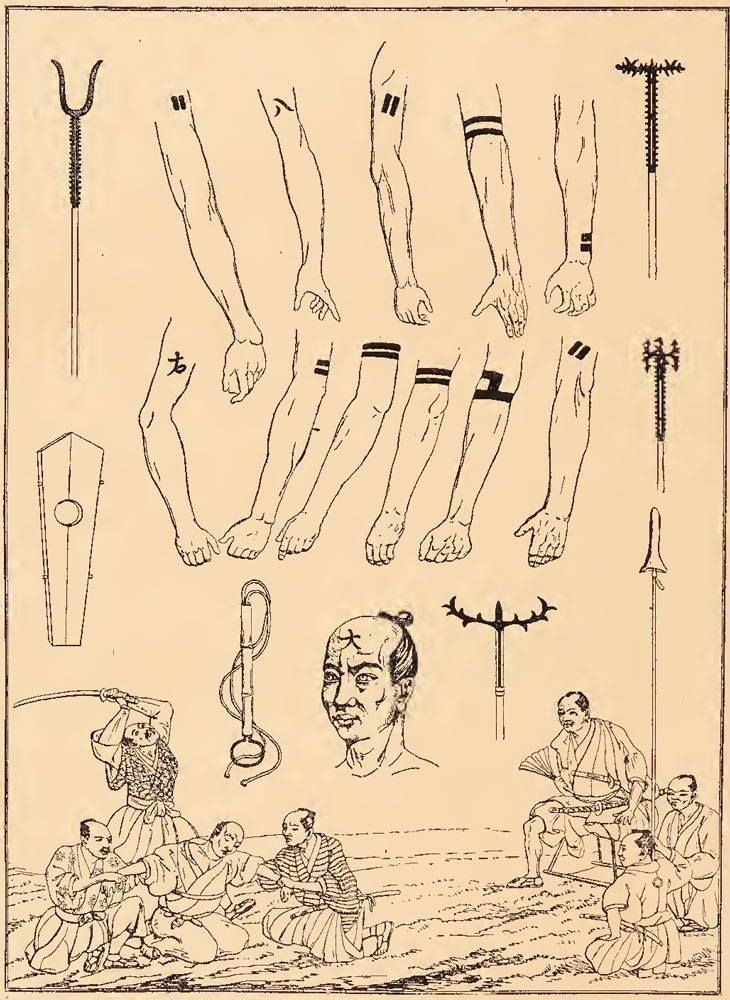 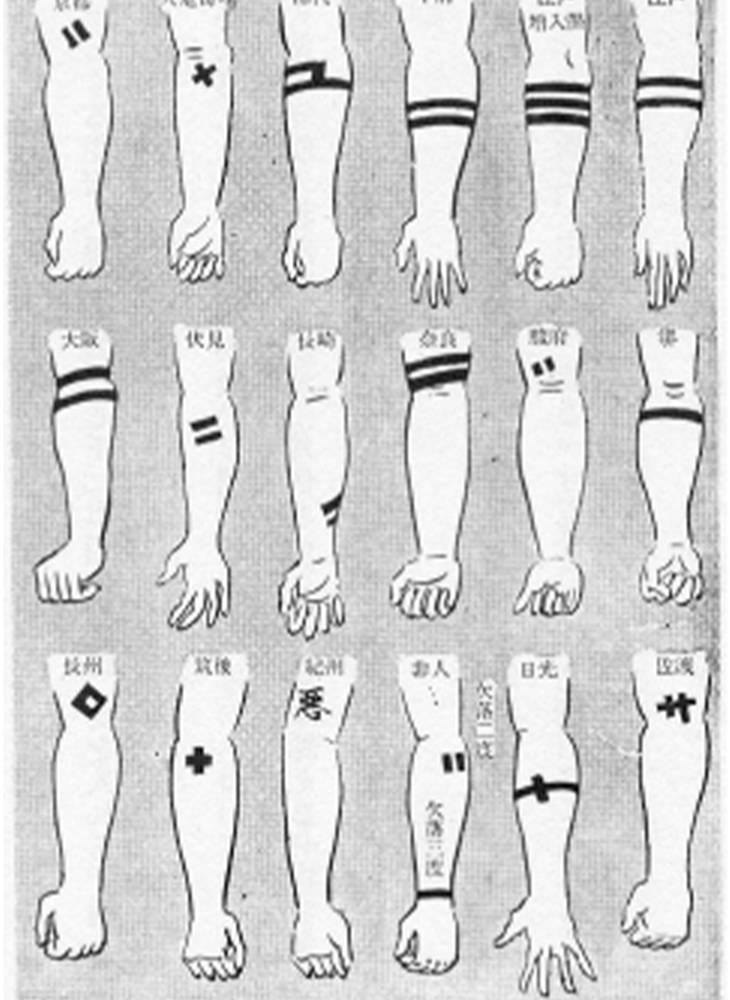 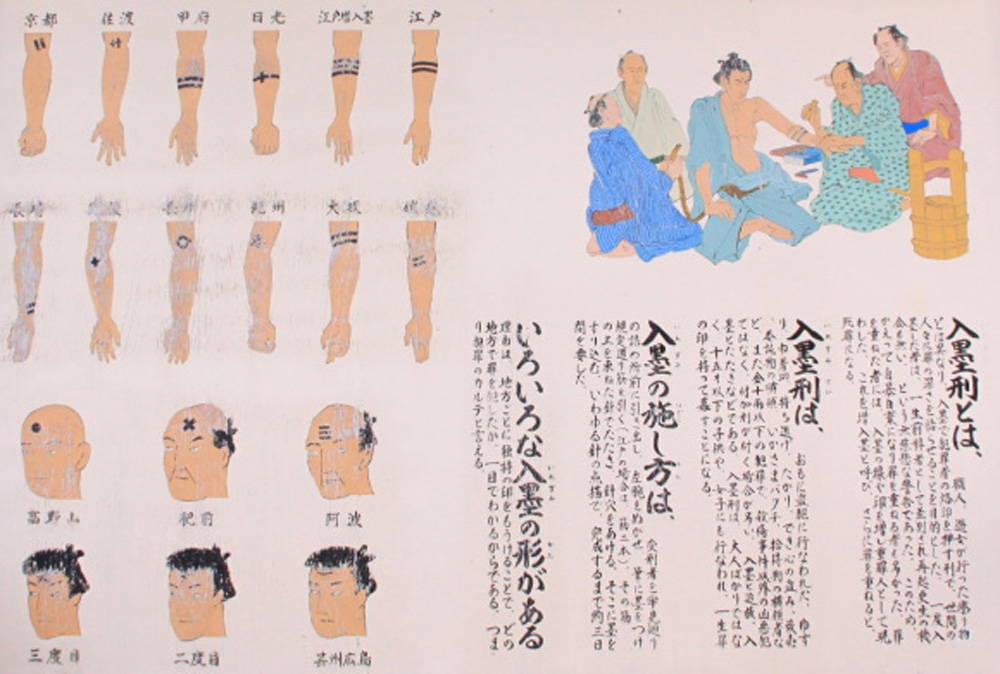 On the other hand there were tattoos as a decorative, spiritual art form with roots going back at least as far as 3,000 BC. The 1700s and 1800s were a flourishing time for arts and saw a real boom in elaborate, colorful tattoos known as horimono (engravings), which we nowadays all recognize as the typical, traditional Japanese tattoo. 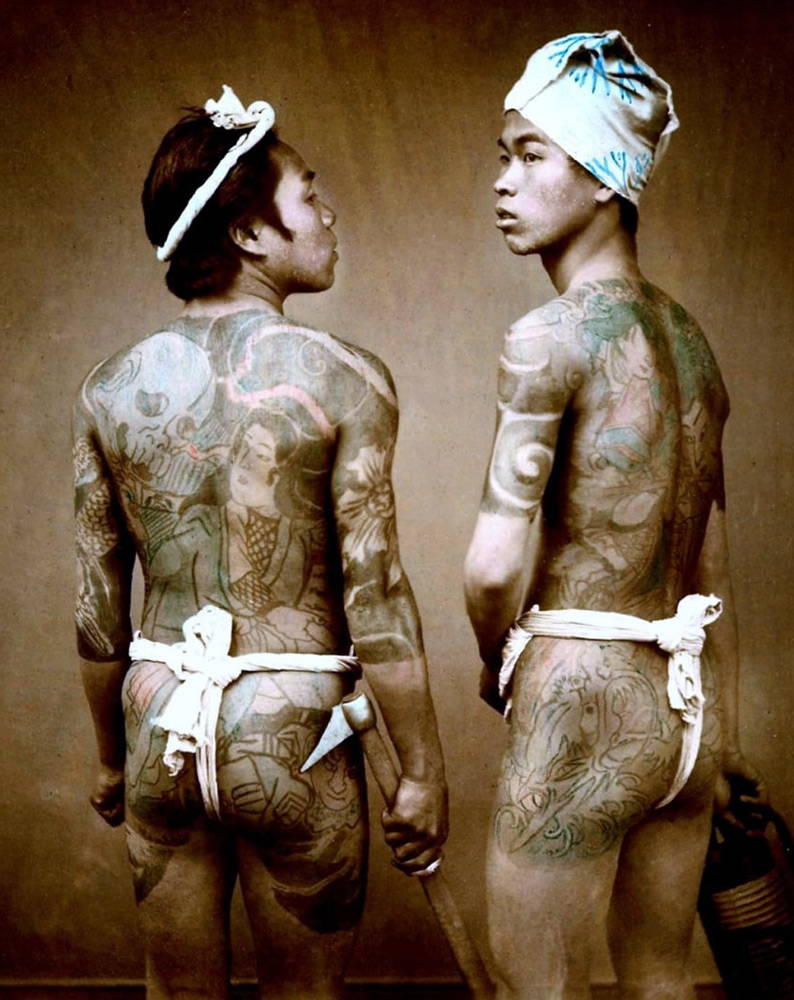 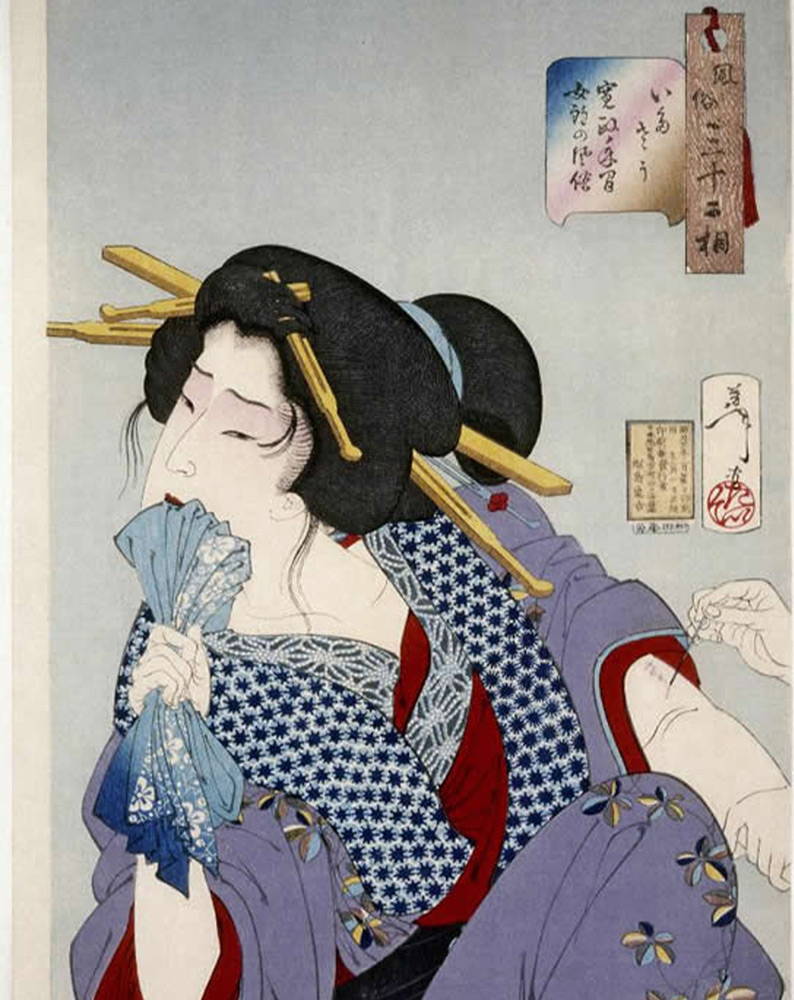 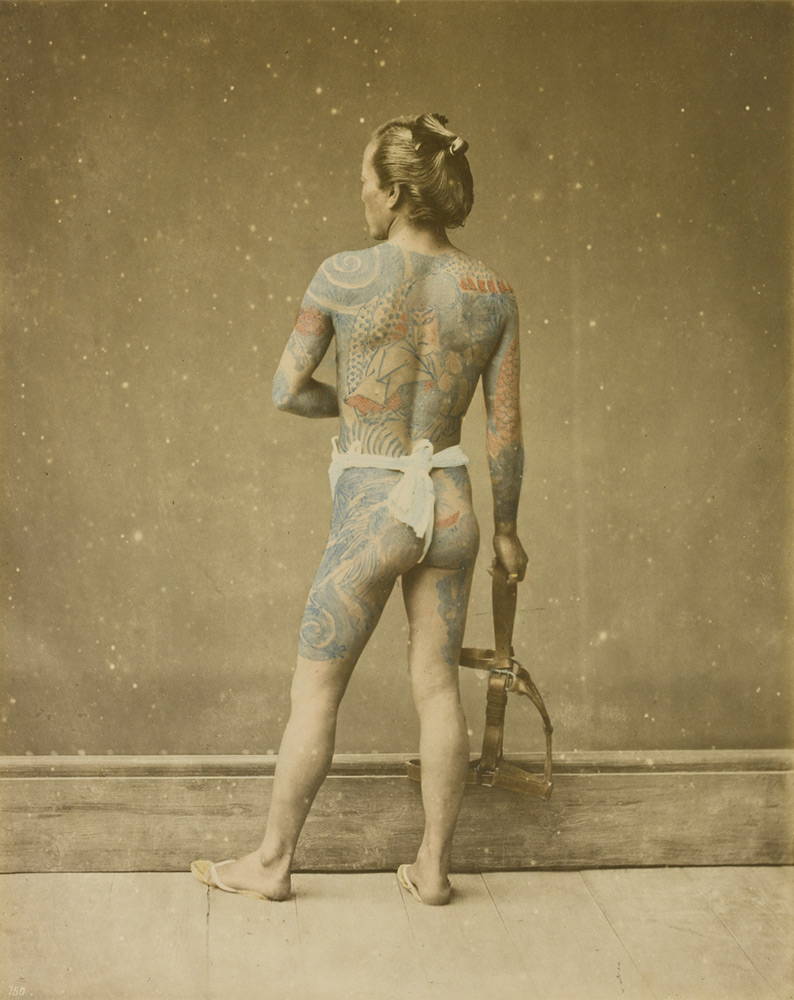 It was the heyday of hand poked (tebori) large-sized back pieces, sleeves, shoulder pieces or bodysuits featuring motifs from folk tales, myths, nature, Buddhism, and Shintoism – Japan’s indigenous religious belief system. Especially lower class males flocked to horishi, tattooists, to have them cover their bodies with these designs as they were not only extremely fashionable but also served as lucky charms to protect manual laborers such as construction workers, locksmiths, carpenters or firemen. Even prostitutes reportedly got tattoos to either manifest their love to a regular customer or to “snatch more clients” with colorful crab motifs on their bodies.

Popular ukiyo-e painters like Hokusai not only widely spread woodblock paintings of folklore heroes or brave firemen covered in meaningful symbols, but their artworks themselves were often used as visual references for tattoos, which is why ukiyo-e and traditional tattoos look very much alike to this very day. Without a doubt there were small criminals using the then trendy, large-scale tattoos to cover up penal ink stains, but especially the urban youth was gripped by a horimono hype back then.

The party was lastingly ruined in 1872, when the new imperial government banned all kinds of social misdemeanors from peeing in front of stores to mixed communal bathing, production of pornographic drawings or tattooing. All in the name of modernization to quickly become as powerful as Western nations, and probably also to put the youth and lower classes in their place.

The intricate art of tattooing was more and more pushed to the underground. Interestingly enough, the first Western visitors, nobles and upper-class diplomats, were captivated by horimono. They not only brought back vast photo collections of tattooed Japanese citizens but also got some ink work done themselves, giving rise to Japanese one-point designs as they simply couldn’t stick around long enough for the traditionally larger pieces.

Regardless of the fascination of those early foreign visitors, colorful horimono were outlawed and their perception was irrevocably conflated with punitive ink for criminals in people’s minds. Although the ban was lifted in 1948 by American occupation forces, the art form has never fully recovered.

After the war Japan was once again striving to keep up with the wealthy war-winning West, quickly modernizing and standardizing the life of the perfect, happy corporate samurai and his family. Tattoos had no part to play in this clean image, nor were Japan’s yakuza. In back rooms and the tattooist’s private apartments, it was them who kept the traditional art of horimono alive. The Yakuza and, once again, foreign visitors. 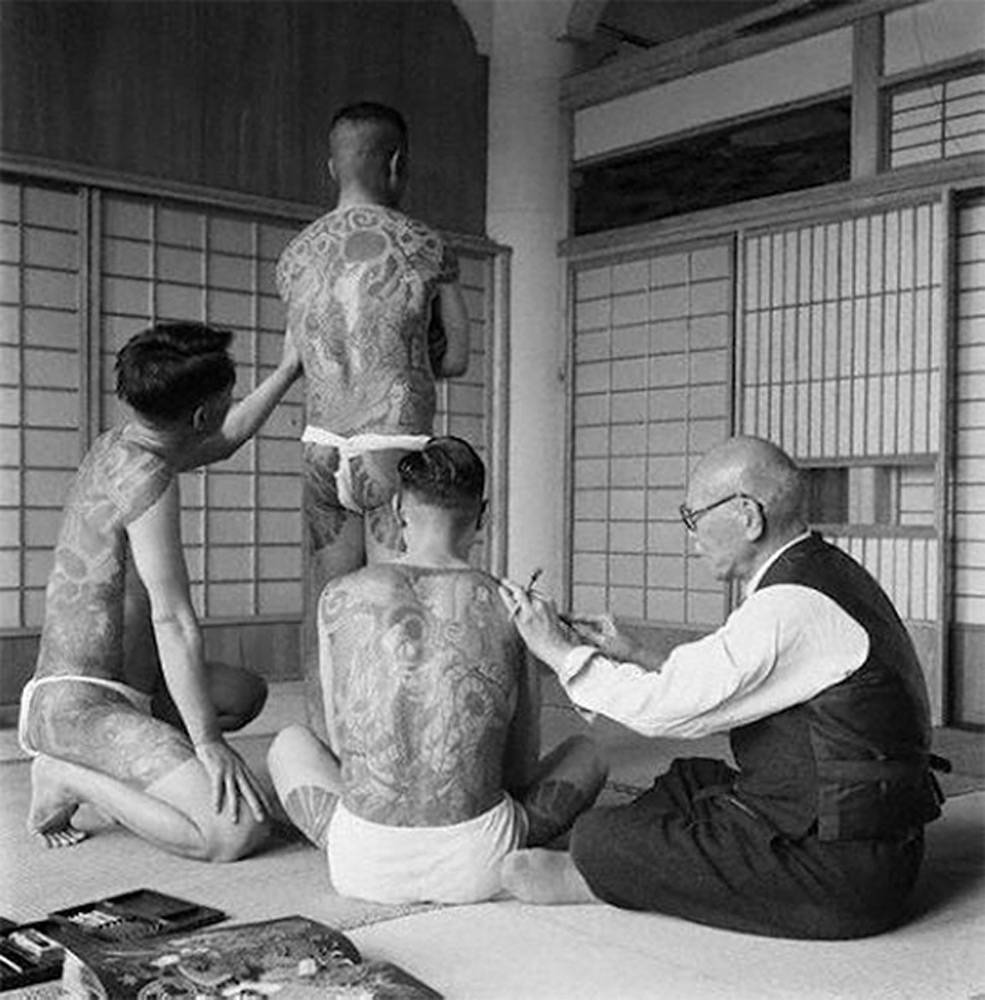 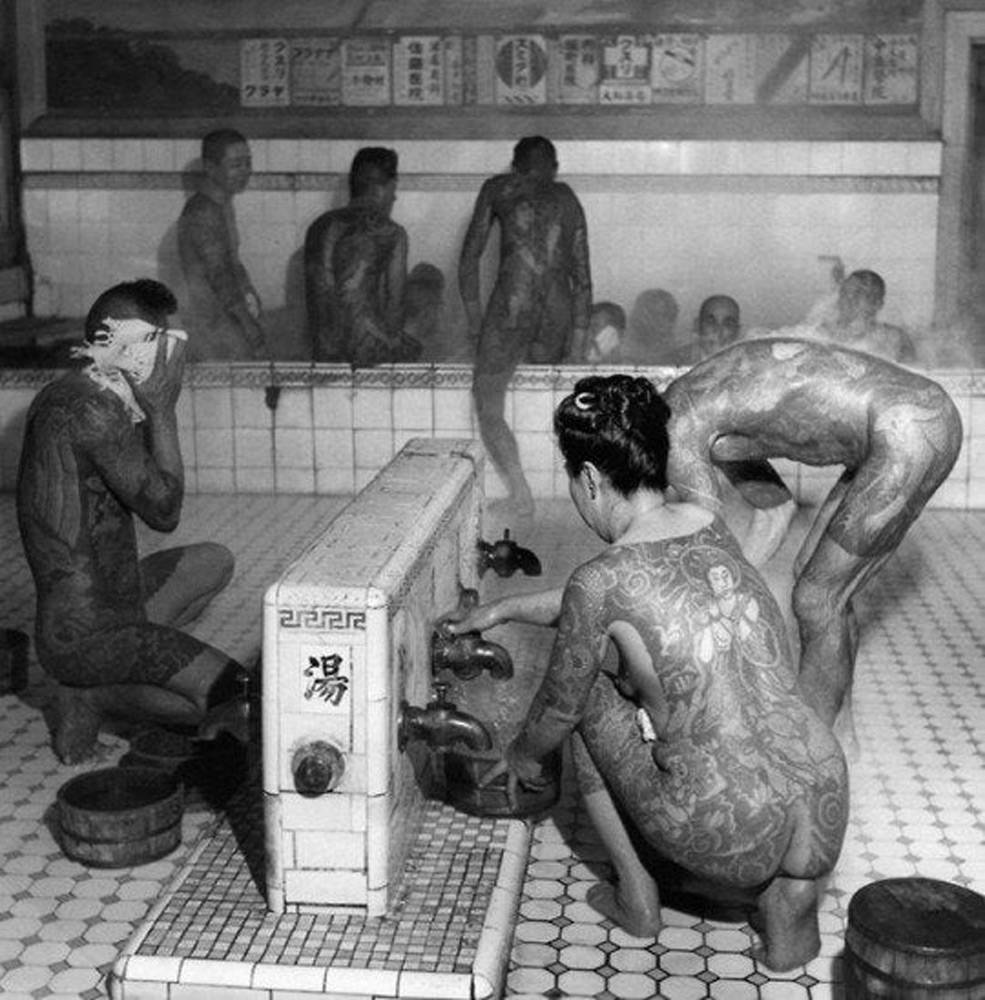 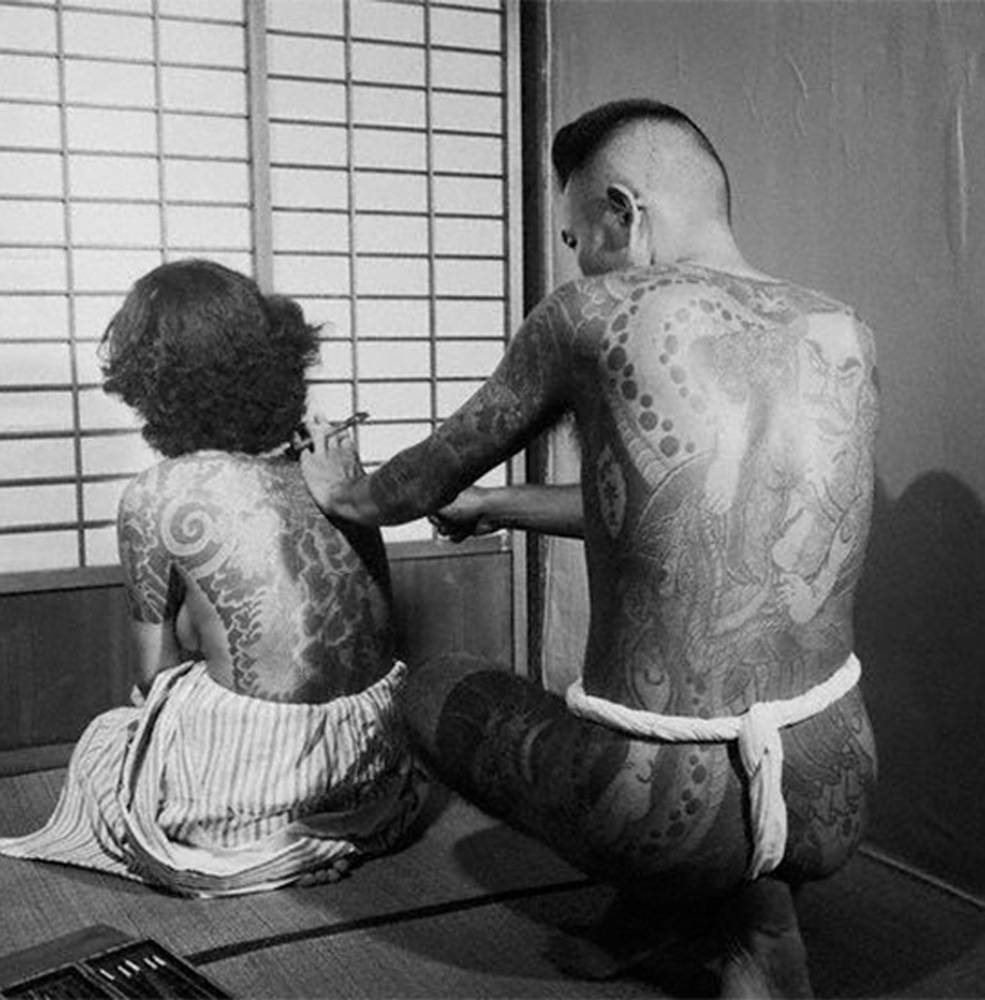 Western or rather American style tattoos had entered Japan directly after the 2nd world war, together with a general wave of fascination for the American way of life, Jazz, rockabilly culture, you name it. But tattoos of any kind would remain underground until the 1990s. The decades in between were much more characterized by foreign observers and tattoo artists exporting Japanese iconography, most prominently to the US. In the 1970s now well-known subculture photographer Martha Cooper managed as one of the first western observers to get access to a traditional tattooist. She extensively covered Horibun I and his traditional use of needles affixed to a slender piece of bamboo. Tattoos were customized and done in private, by personal referral only. 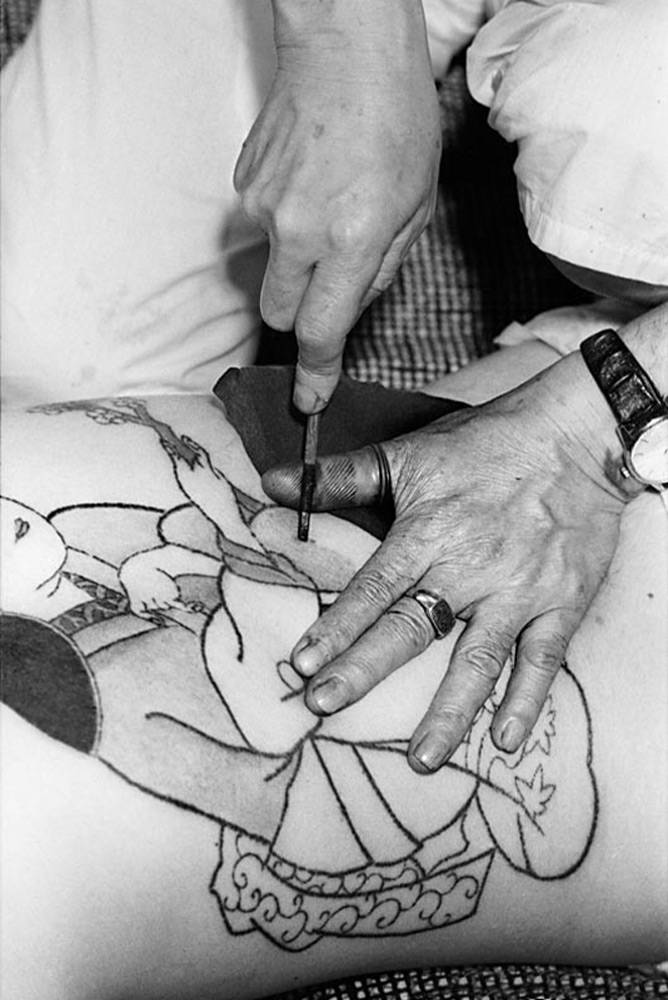 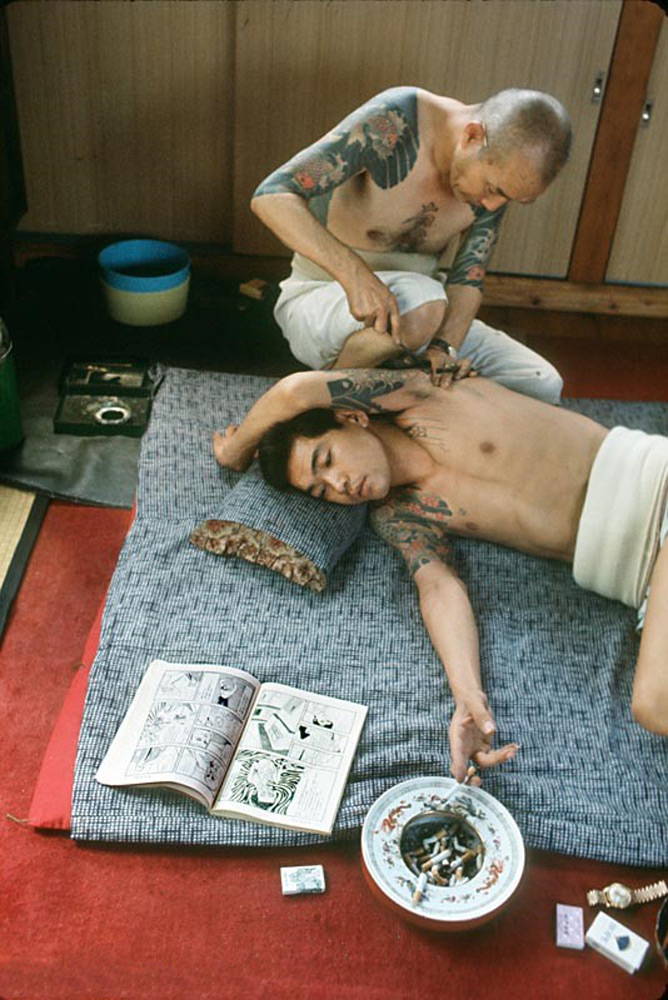 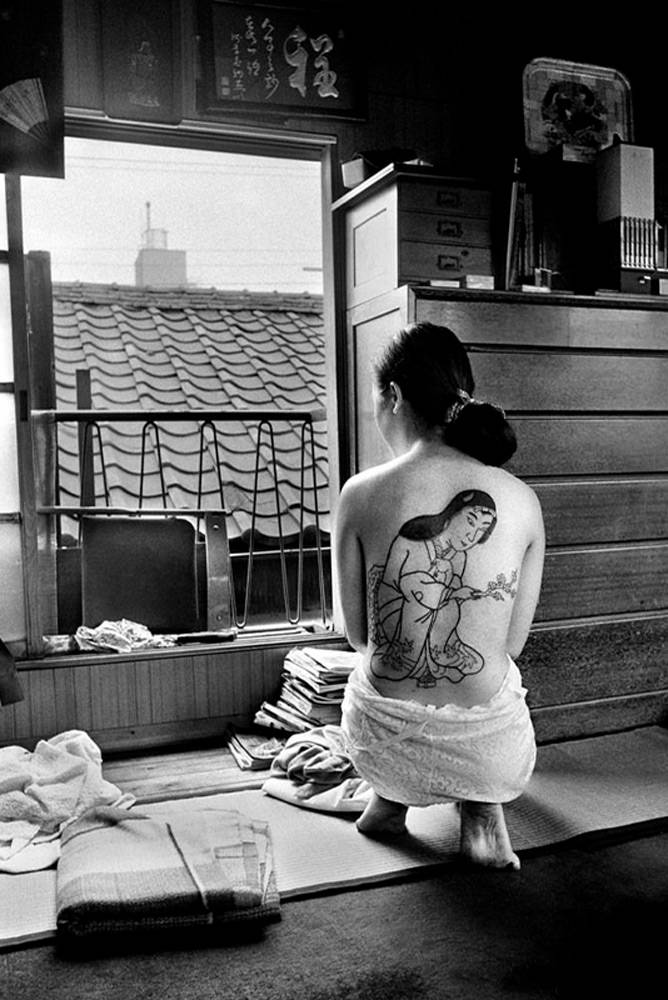 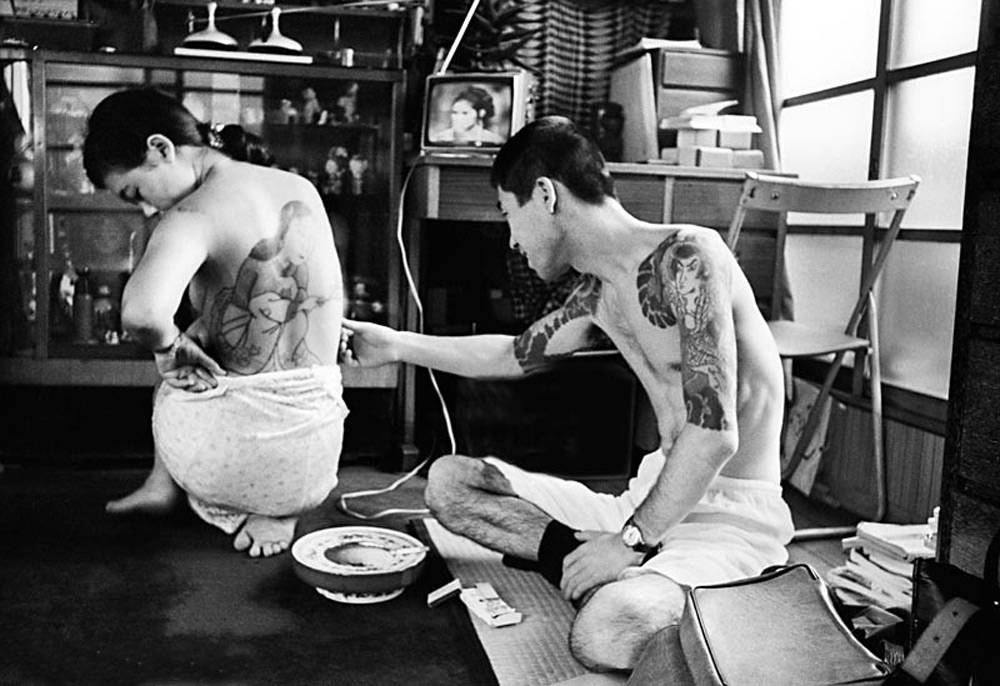 The biggest driving force behind the export of horimono imagery was none other than the American tattoo legend Don Ed Hardy, widely known as the founder of America’s first custom only shop. Obsessed with fine arts and tattooing since his childhood, he had immersed himself in the world of Japanese aesthetics through books and historic wood print blocks long before he finally had a chance to visit the country in the early 1970s. There he not only had some pieces done on himself by Japanese artists, but he also didn’t waste asecond without networking, studying or collecting material for his iconic magazine “tattoo time.” Hardy not only adopted the appointment-only system to his shop back at home, first and foremost his artistic style was obviously influenced by Japan’s distinct iconography often featuring dragons, tigers, folk tale heroes, koi fish and more. 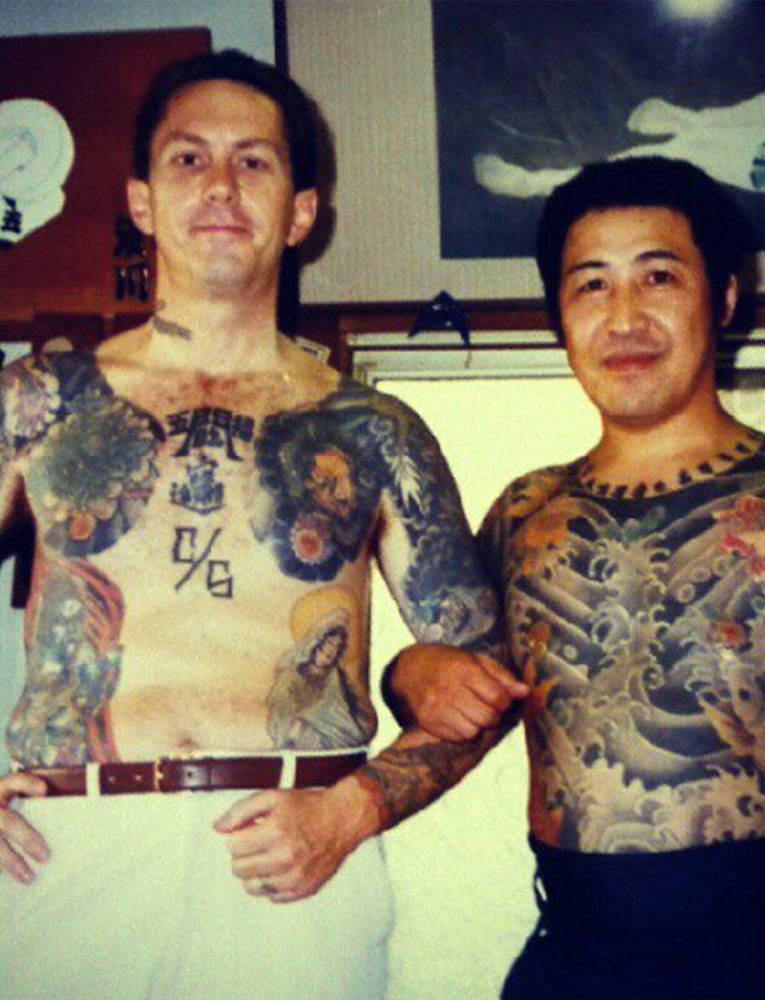 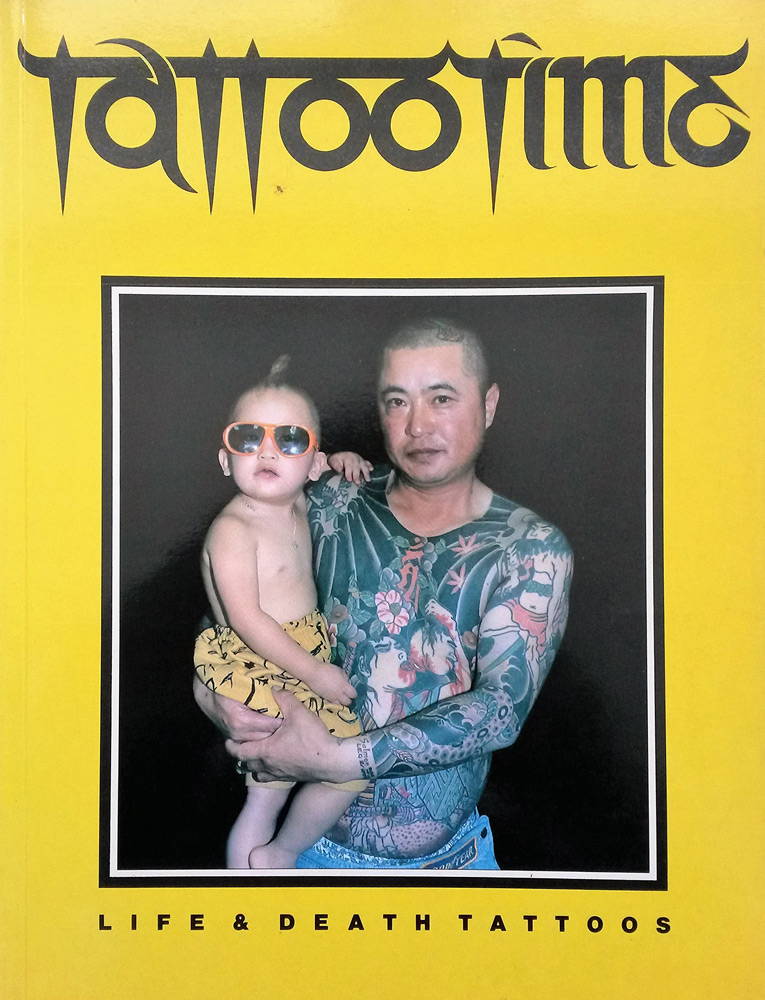 Back in the 70s he quickly became close friends with Horiyoshi III – nowadays one of the most known horishi with frequent appearances in subculture documentaries and Youtube clips. Both grandmasters are keen on managing their own legacy just as much as they are obsessed with collecting books, art works and memorabilia. Yet their take on tattooing does show differences: Hardy was and still is dedicated to having people recognize tattoos as a valuable and pervasive art form, with a right to be shown in galleries and museums. Horiyoshi on the other hand always emphasizes the manual aspect of tattooing. He proudly refers to himself as a shokunin, a craftsman inspired by hundreds of years of traditional iconography, working with techniques handed down from master to apprentice in years and years of training. 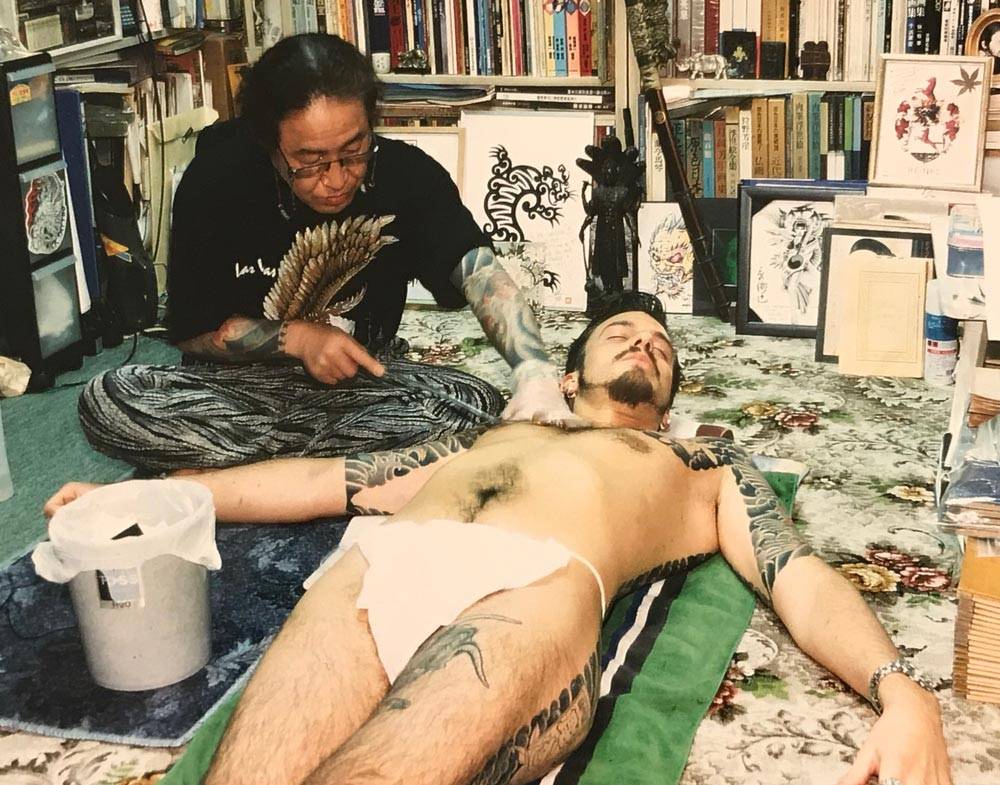 You can easily find Horiyoshi III and other horishi on the web and on social media nowadays, but the biggest change in Japan’s tattoo landscape occurred in the late 1990s when the first street stores began to pop up. An unbroken love for Americana fashion, an influx of hip hop culture but also Western rock and hollywood stars openly flaunting tattoos can be cited as driving forces for this new generation of Japanese tattooists.

Self-taught and heavily influenced by western tattoo designs due to trips or student years spent abroad – pioneers like the founders of Nagoya’s “Eccentric Tattoo Shop” or Osaka’s “Three Tides Studio” began to bring tattoos back from the dark outskirts of Japanese society by visibly integrating them into the cityscapes. All with the help of frequent visiting artists, at first mostly from the US. The relationships between tattooists from East and West have been flourishing ever since the 90s in an exchange of design styles with neither side being shy of renewing or freely mixing American and Japanese iconographies. There are even outstanding examples like Hori Benny who, after a traditional apprenticeship in Osaka, has coined the style of otattoo or otaku-tattoos by “mixing the colorful and lively world of anime otaku geek culture with human body art.” 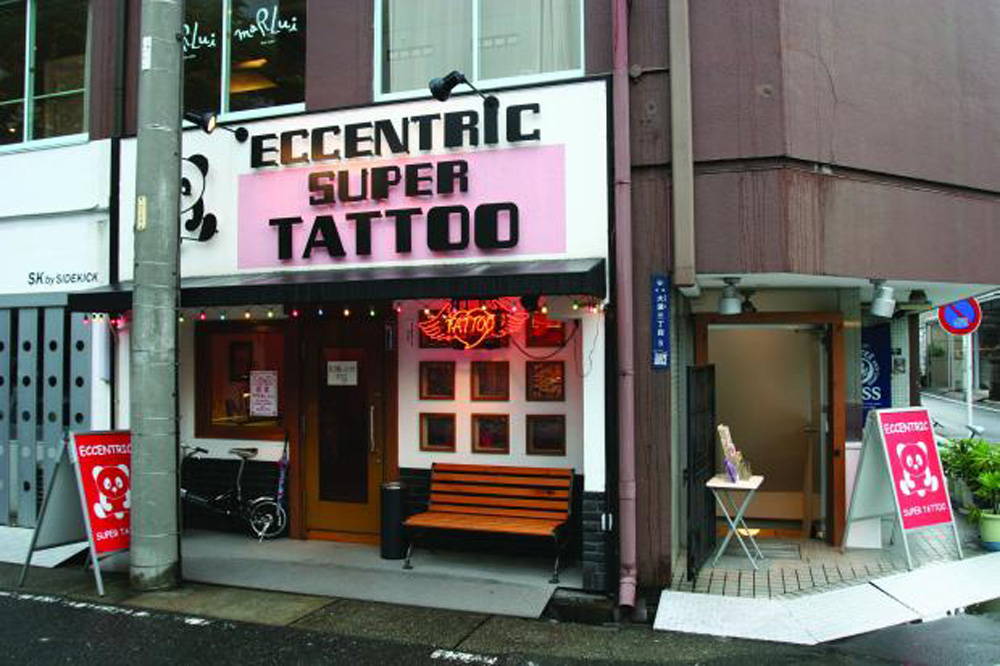 Although you can see a few musicians, artists, fashion influencers, apparel or barber shop staff openly showing their tattoos, it would be a mistake to assume that tattoos are widespread or welcome by the broader Japanese society. According to recent stats only about 2% of Japanese are tattooed compared with 38% of global respondents to similar surveys. Tattoos are still banned in most public baths, hot springs, public pools and even at many beaches. Shops and online stores offer a variety of clothes and special bandaids to cover up tattoos in public. 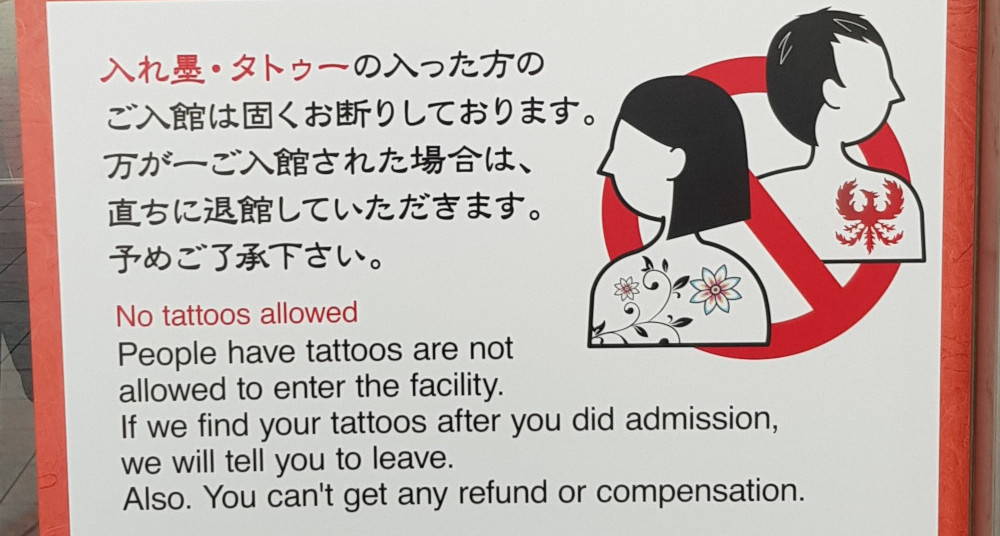 It seems almost impossible to disconnect tattoos from the underworld after conservative politicians and pop culture have spent decades cementing the equation of horimono / tattoo = yakuzas and delinquents. Even a contemporary Japanese tattoo artist – heavily tattooed & taught by a traditional master – admitted that he’s somewhat prejudiced as there is almostzero exposure to inked people in everyday public life. Tattooed bodies are likely to be shunned for many more years to come.