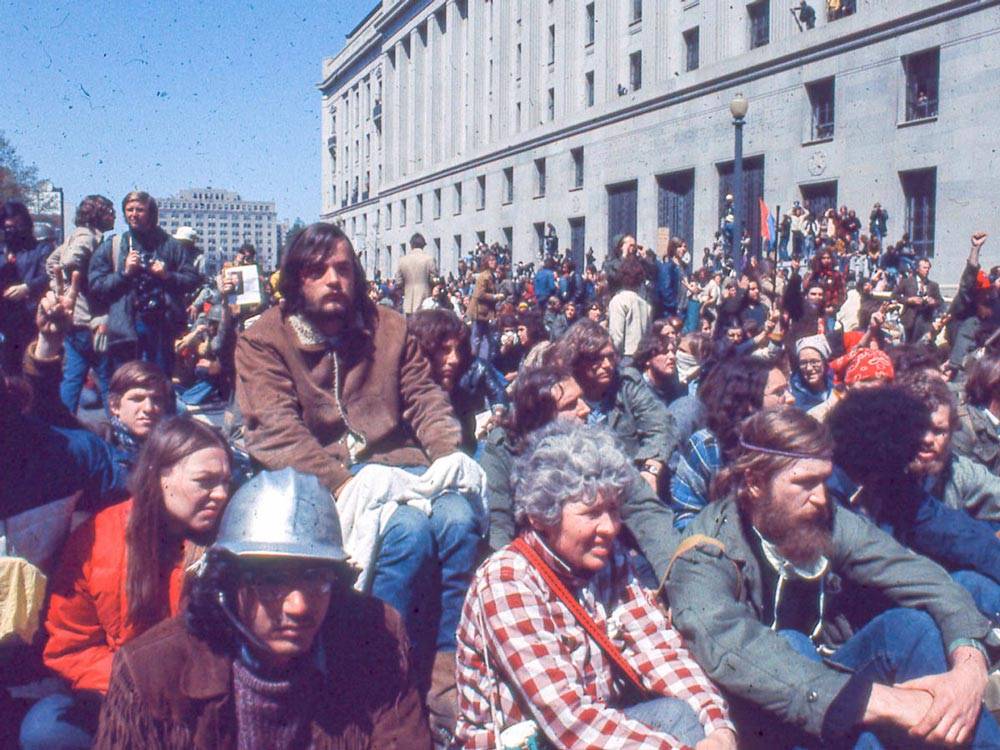 The Subversion of War: How Vietnam Sparked an Unstoppable Cultural Revolution

The One Block Down editorial archive is an ever-evolving resource detailing the cultures, movements and ideas that helped define contemporary stylistic discourse. From unique takes on today’s leading pop-culture topics, to off-kilter stories that might have slipped through the net, our editorial archive is as fundamental as it is abstract.

The 20th century was a time of remarkable change. Known for completely changing the way people lived, it saw innovation across a great many fields, from politics and the economy, to culture, science, technology, and medicine. In the latter fields particularly, the 20th century ushered in more progress than any other century of human history.

While it was a time of great opportunity, it was also a time of turbulent transition. With this new-found form of liberalism helping millions around the world observe staid traditions more critically, the last century was defined by mass revolt and protest. And at the centre of the global population’s heightened perception was the idea of war, and more generally, “war institutions”.

Scroll down below to read Part 1 of One Block Down’s latest editorial series, “The Subversion of War”, documenting the global perception shift brought on by the Vietnam war. 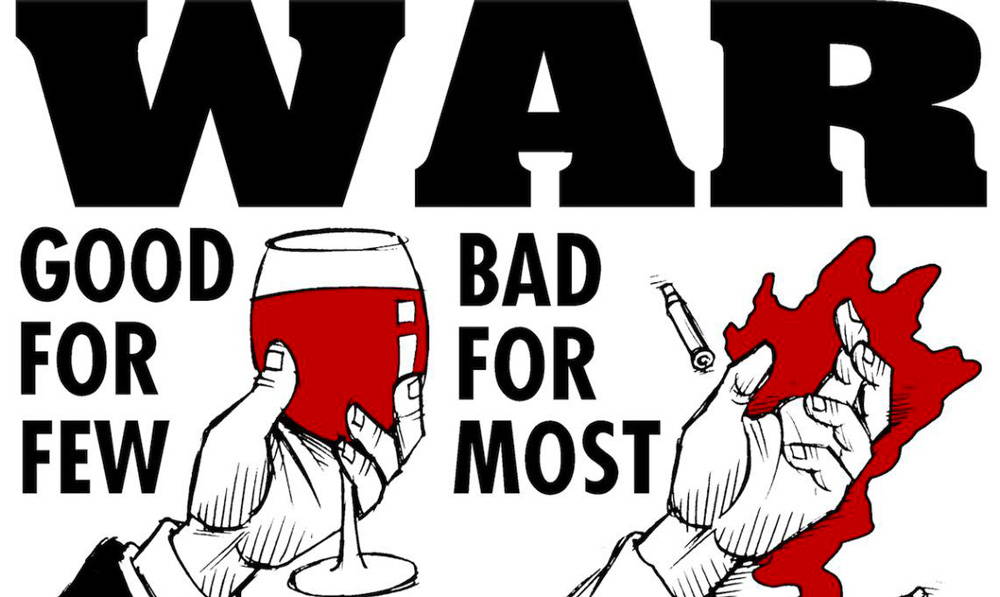 For thousands of years, war has been accepted as a fixed, inevitable event, in which consequences such as duration, destructiveness, and economic impact were far-reaching and ill-considered. Over the course of the last century however, all of this began to change. Starting from the First World War, which, as pointed out by the English historian Arnold Toynbee, closed “a span of five thousand years during which war had been one of mankind's master institutions.”

For the first time in history, a global population was beginning to accept that war could no longer be justified, with WWI marked as one of the first to ever be met with preemptive anti-war movements. With information becoming more of an accessible good — no longer circulated around institutions with power — the public soon grew weary of war’s veiled futility. 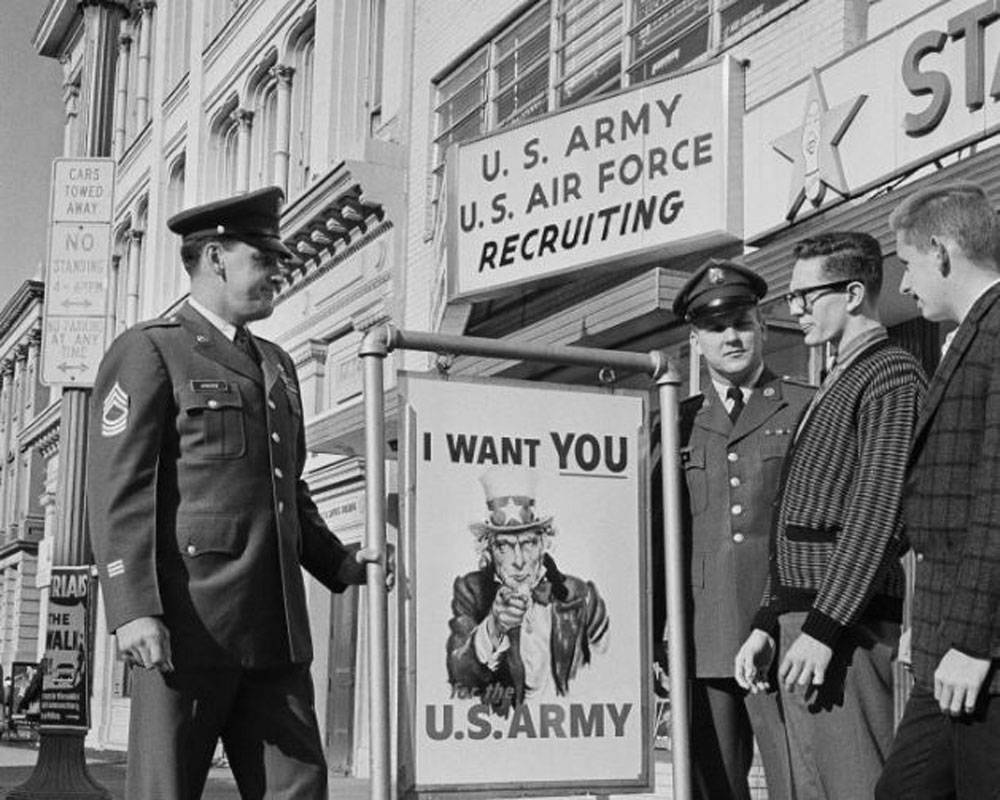 Even though public “disinterest” had been rightfully piqued, the Second World War and many others went ahead as planned.Despite this however, it is essential to note that a universal change in opinion had begun. With war long-considered a fundamental element of any nation’s survival, people were slowly beginning to understand that it was little more than a pre-meditated farce set on furthering the interests of the oppressing nation.

And while the public fought through this transitory phase, trying to figure out ways to effectively oppose such a huge institution, the Vietnam War happened. Taking place between 1955 and 1975, this 20-year-long bloodshed was the final straw. Serving very much as the impetus towards a subversion of the symbols associated to war, Vietnam sparked a global transition from “anger” to “peace”, and opened the world’s eyes to solutions that did not end in mass destruction. 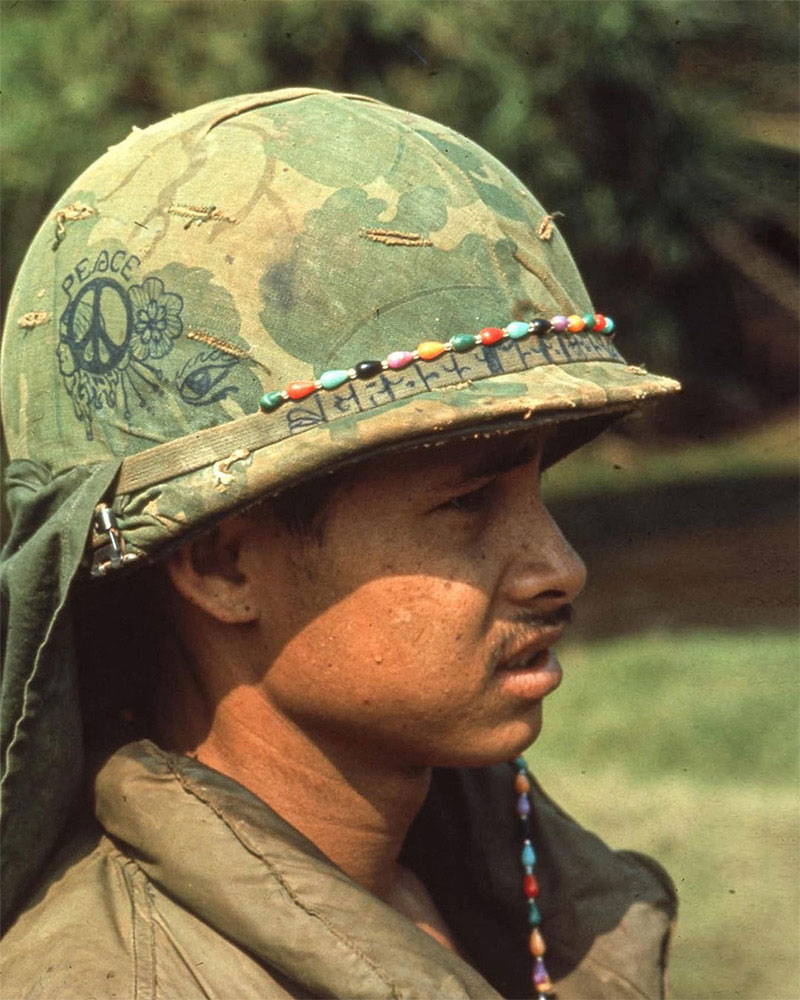 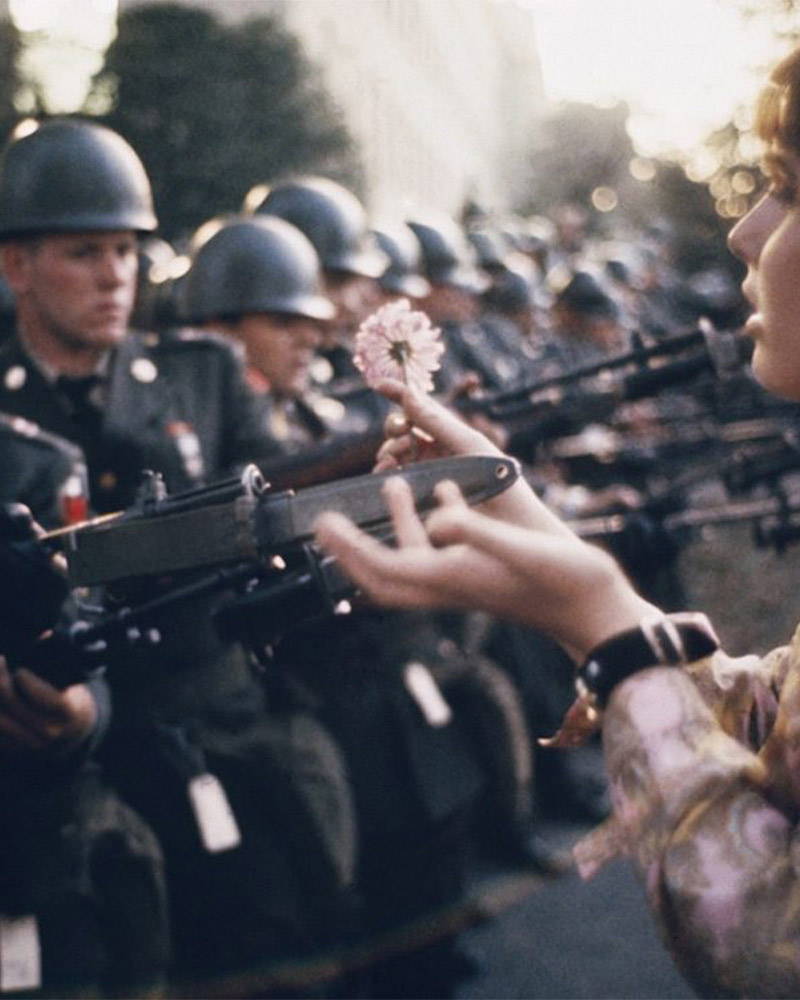 Even if 1955 is widely considered as the official year that the conflict in Vietnam started, its roots date back as far as the 1800s, when French colonialists controlled the area. This particular conflict exploded following the Second World War and the Communist Revolution in China, ultimately leading China and the USSR to recognize the Communist Democratic Republic of Vietnam in 1950, and begin supplying economical and military aid to the country’s communist resistance fighters.

The situation then precipitated around 1954 when guerrilla groups backed by China and the USSR finally put an end to French rule in Indochina. This end in fact led US President Dwight D. Eisenhower to say that the fall of French Indochina would lead to a “domino” effect, bringing all of South East Asia under communist influence. It was speeches and theories such as this that sparked the American political class’ fixation on Vietnam. 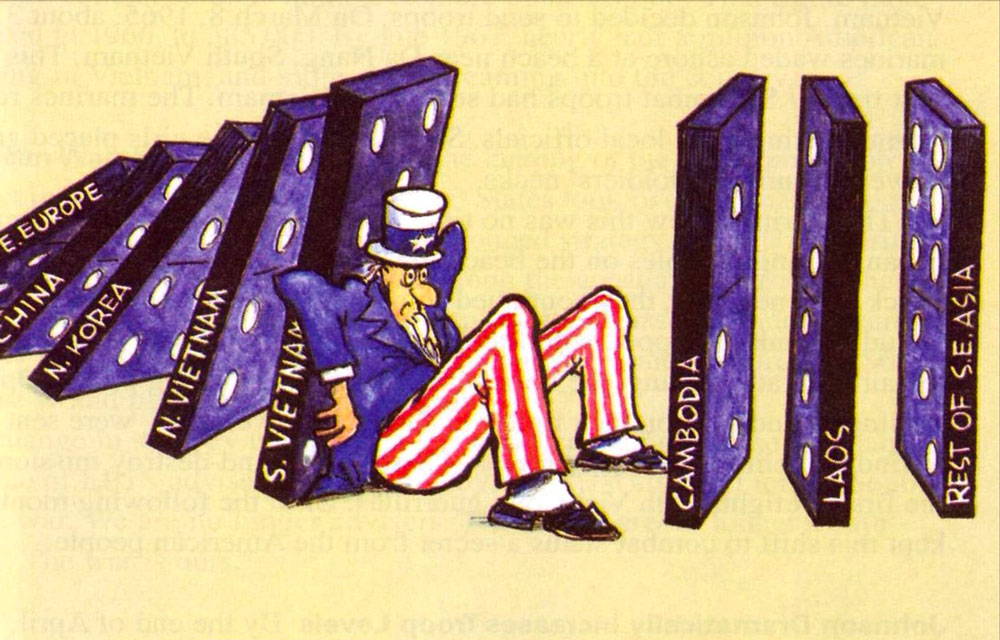 Following the Geneva Accords, Vietnam was divided into two states: pro-American South Vietnam and North Vietnam, which was supported by Maoist China and the USSR. As a result of this division, both states launched small offensive campaigns throughout the rest of the 1950s, financing local groups to bring down their respective governments.

Then, in 1961, America became omnipresent, with President John F. Kennedy sending helicopters, 400 green berets, and launching an aggressive secret operations campaign against the Viet Cong.The following year, the United States started spraying the infamous “Agent Orange” — a herbicide and defoliant chemical widely known for its use as part of America’s herbicidal warfare program — to destroy the vegetation that protected and nourished guerrilla forces in Vietnam. 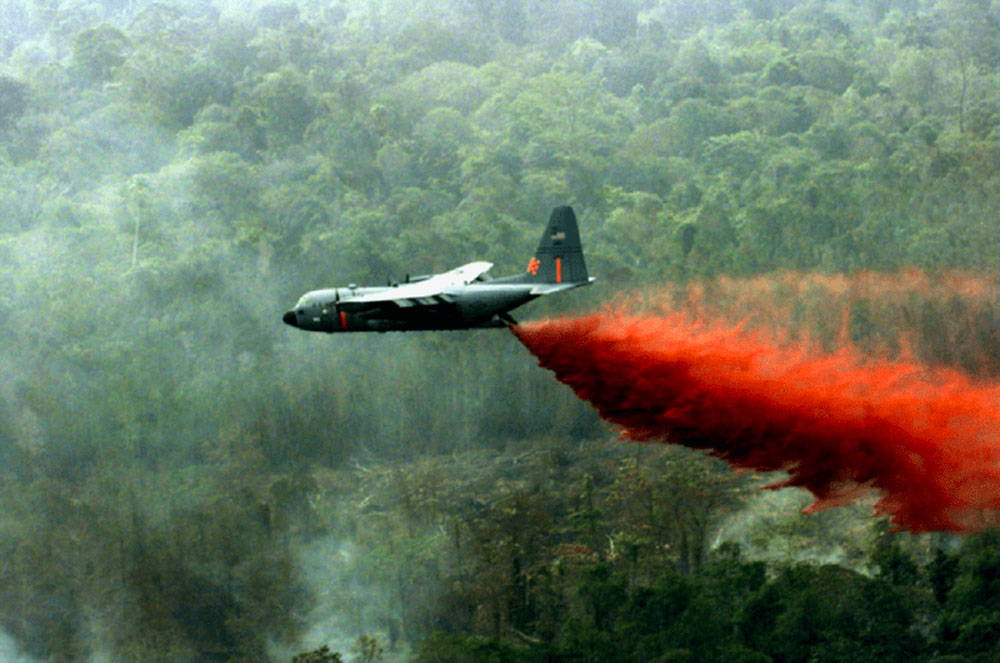 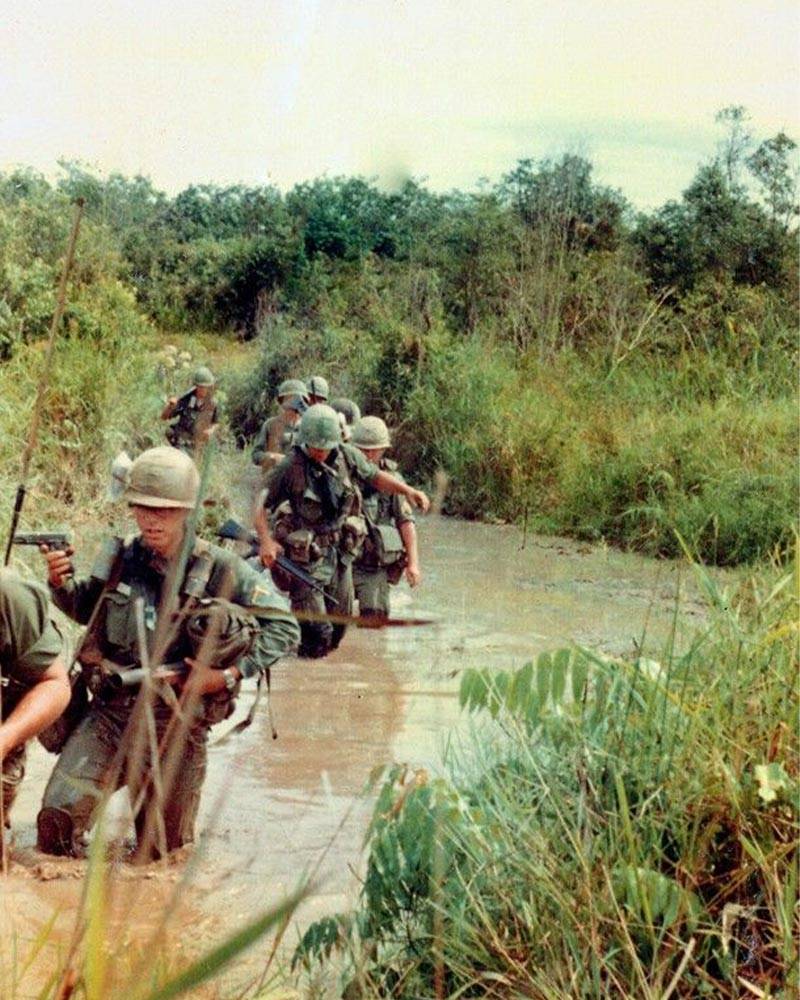 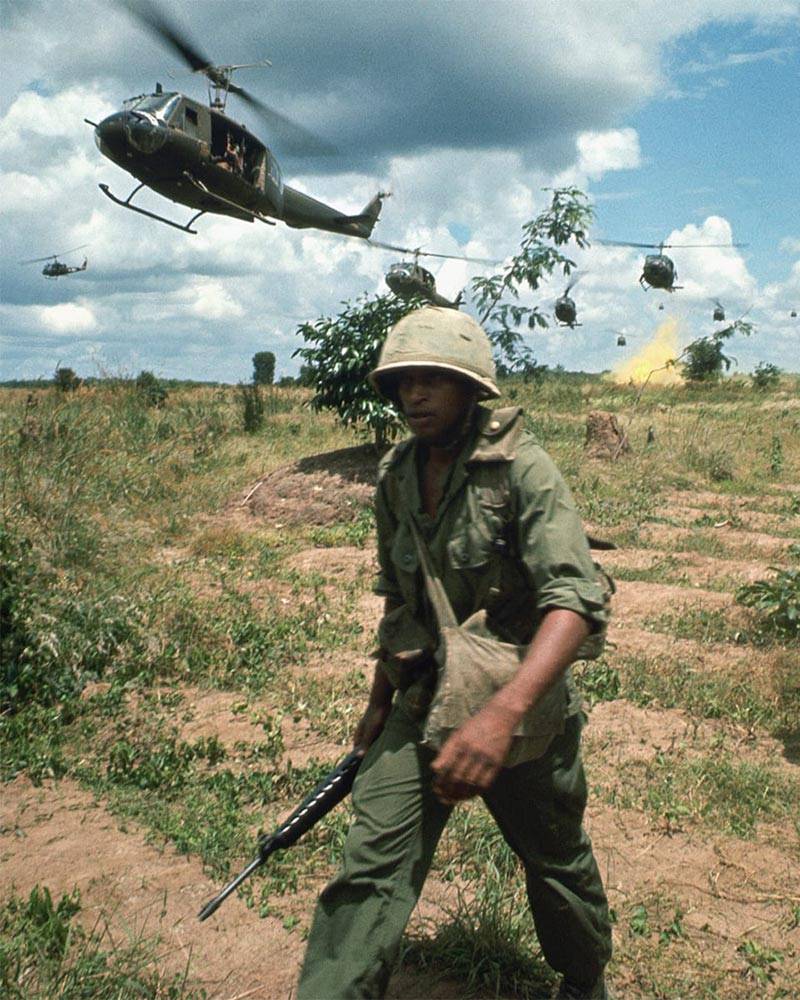 It was here that the Vietnam War as we know it today was triggered. Officially initiated in August 1964, when the congress at Gulf of Tonkin Resolution authorized President Kennedy “to take all necessary measures, including the use of armed force” against any aggressor in the conflict.The following nine years would go on to represent some of the darkest years in American politics. A massive dispatch of 2,709,918 soldiers was sent throughout the war, peaking in April 1969 with more than half a million American soldiers present in the area.

In 1964, opposition to America’s involvement in the Vietnam War began, with demonstrations that over the years evolved and grew into a broader social movement. Including everyone from pacifists and student activists, to the famous Civil Rights and Free Speech movements, America civilians were mobilizing to force the government’s hand. These peaceful and non-violent demonstrations led in 1967 to the result that 41% of Americans considered the intervention in the war a mistake. This percentage continued to rise between August and September 1968, when more than 50% of Americans are said to have considered the intervention a mistake.

Beyond the mere senselessness of war, the reasons for opposing the intervention were varied. One major factor was the “draft” procedure itself, which predominantly enrolled minority and lower to middle-class boys, leading many to believe that it was unfairly administered. The Vietnam War also arose at an unprecedented time for activism and was spurred on by a sudden freedom of information. With up-to-date reporting made available to the public by hundreds of broadcast networks, the war started feeling uncomfortably close to home, causing millions around to take more affirmative action. 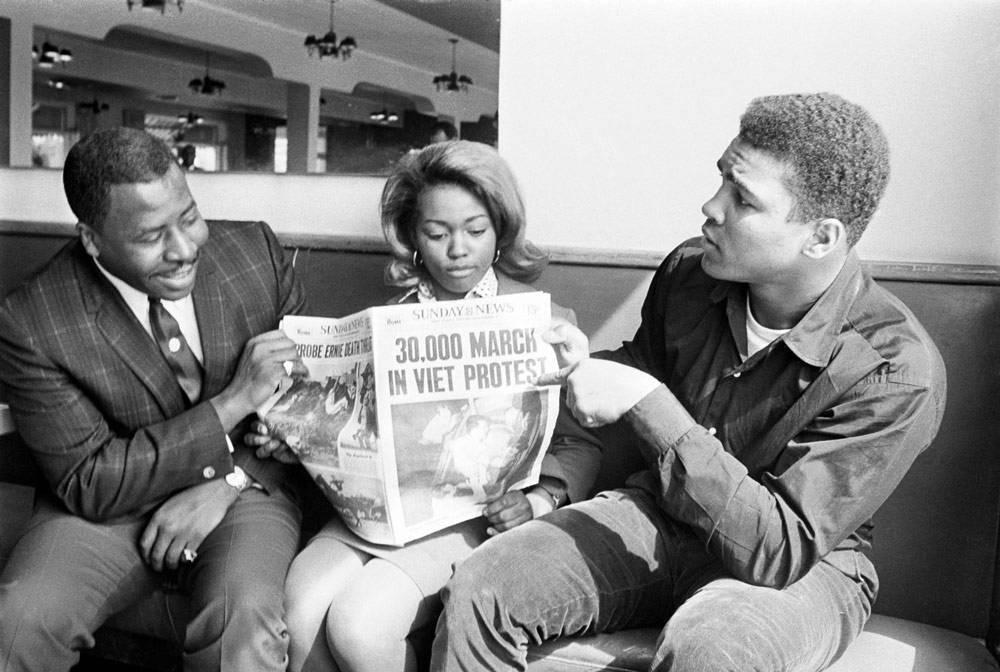 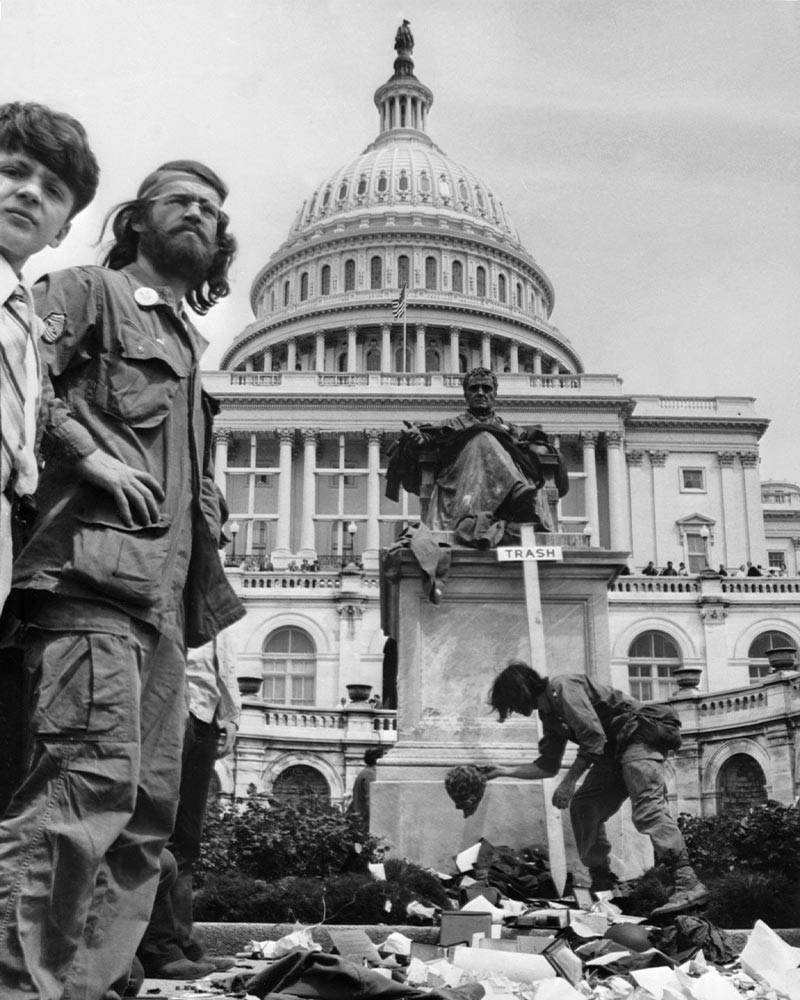 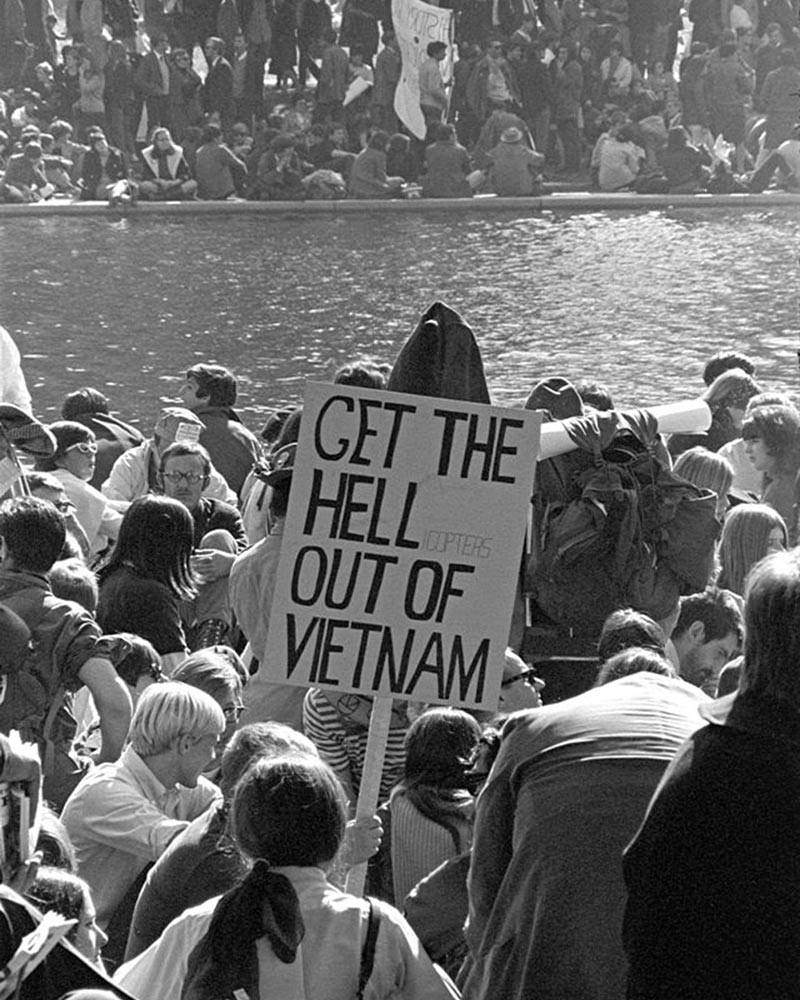 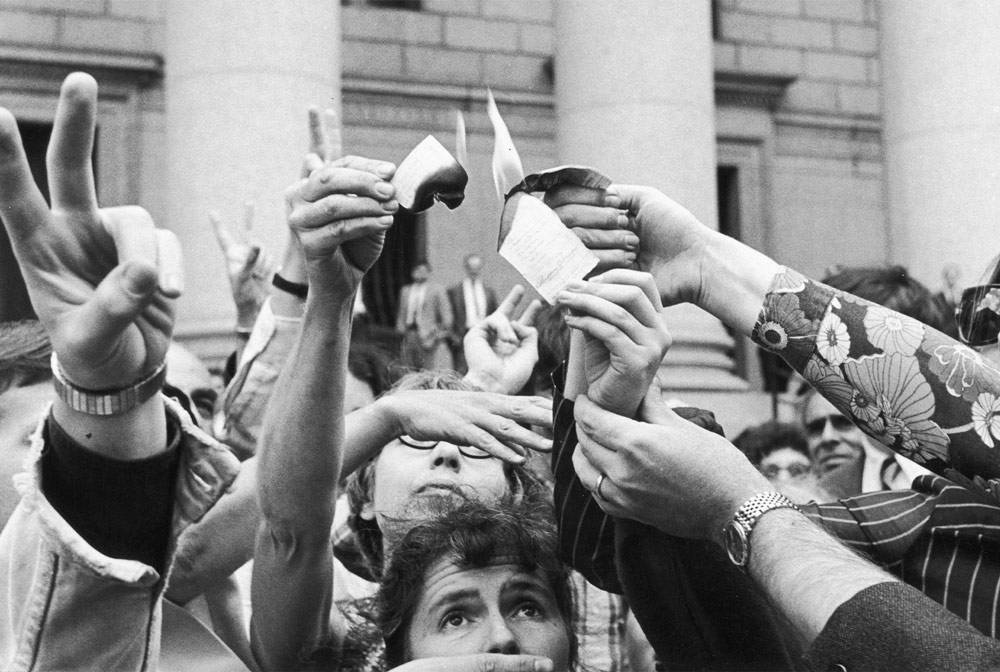 The opposition also had an ideological and moral basis, with the US government accused of having imperialist aims, which ultimately caused many to deem the war as immoral. Additionally, the death of civilians, the destruction caused by innumerable bombing campaigns, and the use of Napalm — an act of genocide which was often downplayed by the media and the government — became the subject of mass protest when photographic evidence began circulating. It was at this point that Eisenhower’s famous “domino” theory was considered little more than an excuse. America could no longer legallyjustify or hush its intervention, with many believing that it essentially escalated what was a civil war to such unfathomable proportions.

For the first time in history, the presence of the media in the war made the horrors caused by the US visible to the American public. Even if scholars such as Noam Chomsky downplayed the role of the media in the conflict, believing that the true horrors wrought by American troops were largely censored, it was still enough to spark an unstoppable cultural revolution. It was here that millions around the world began to subvert the symbols commonly associated to war, turning them into tools for protest. 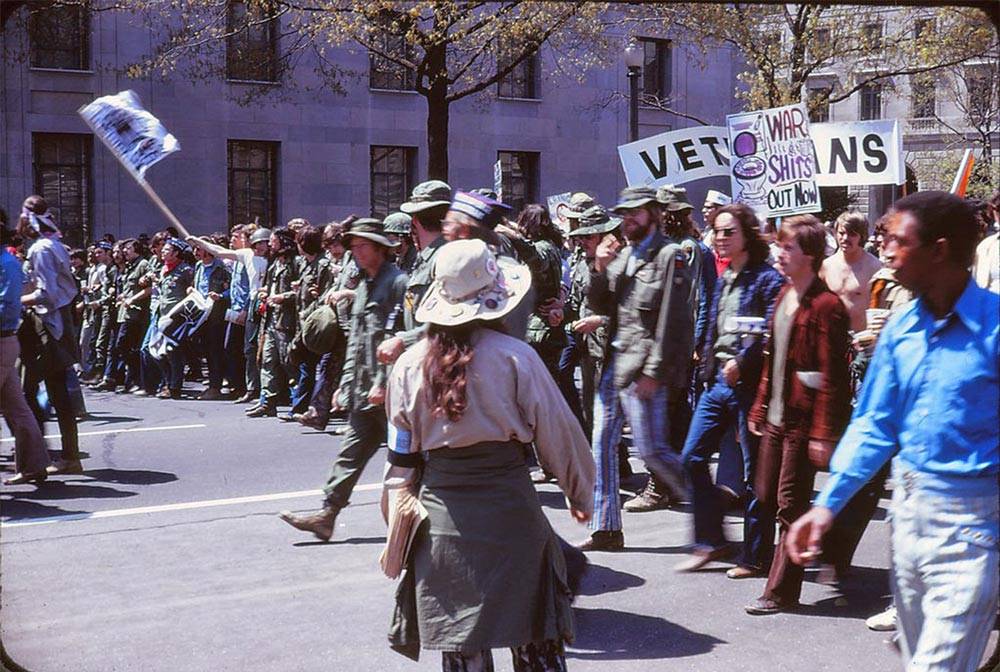 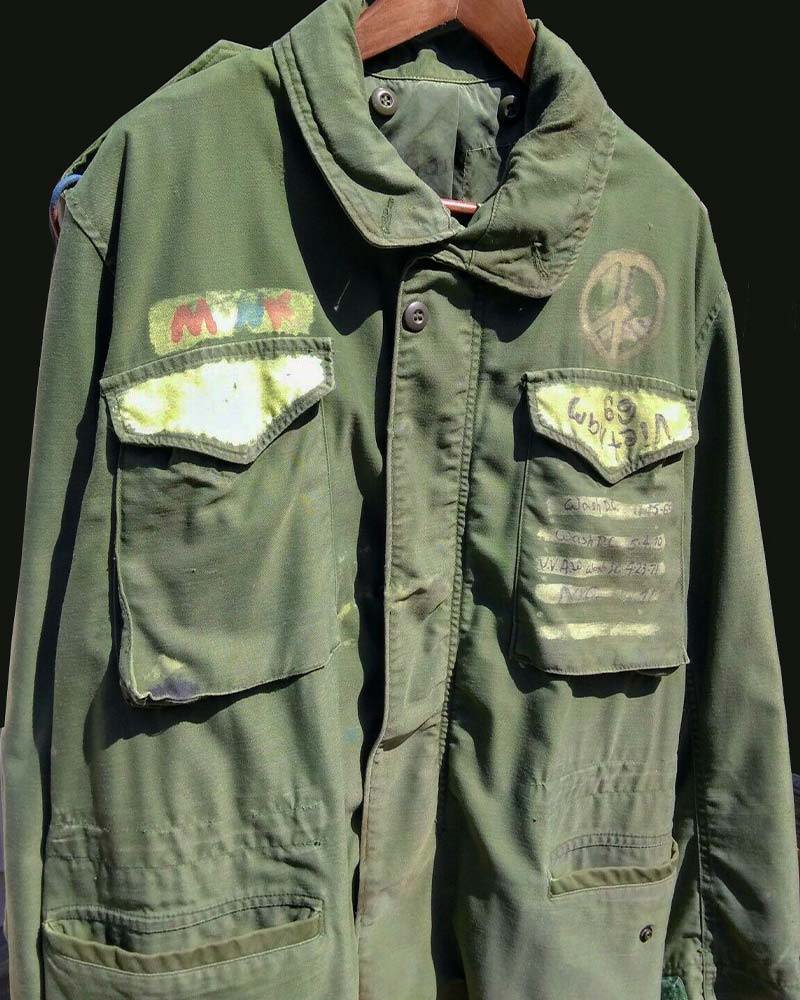 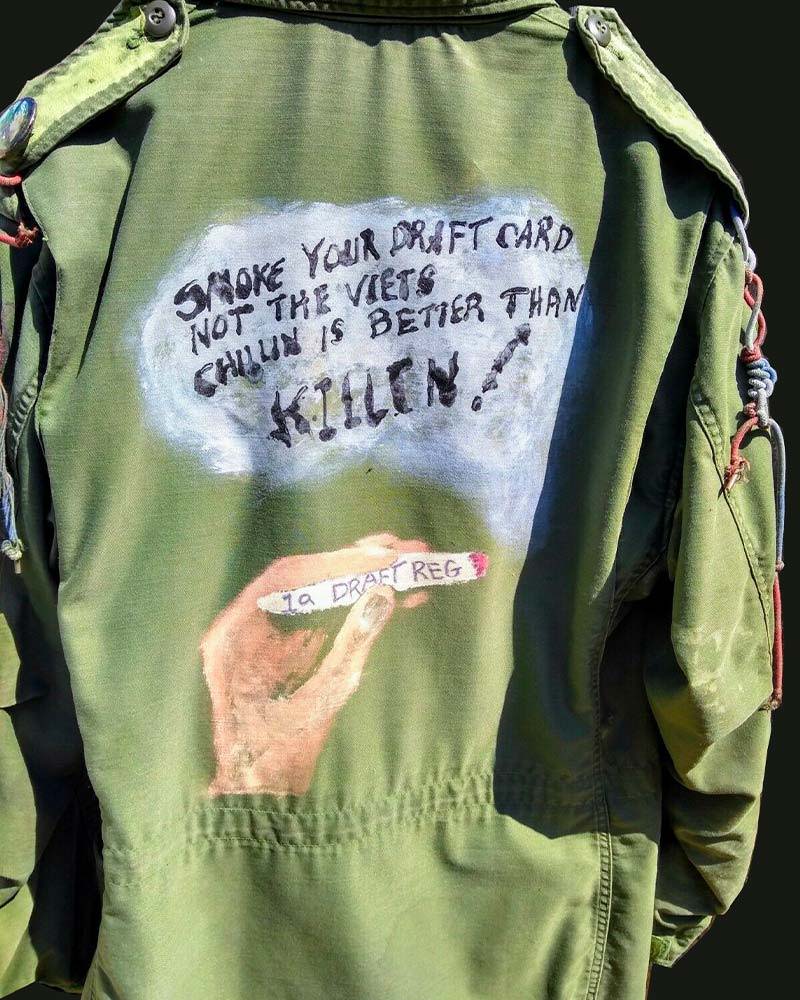 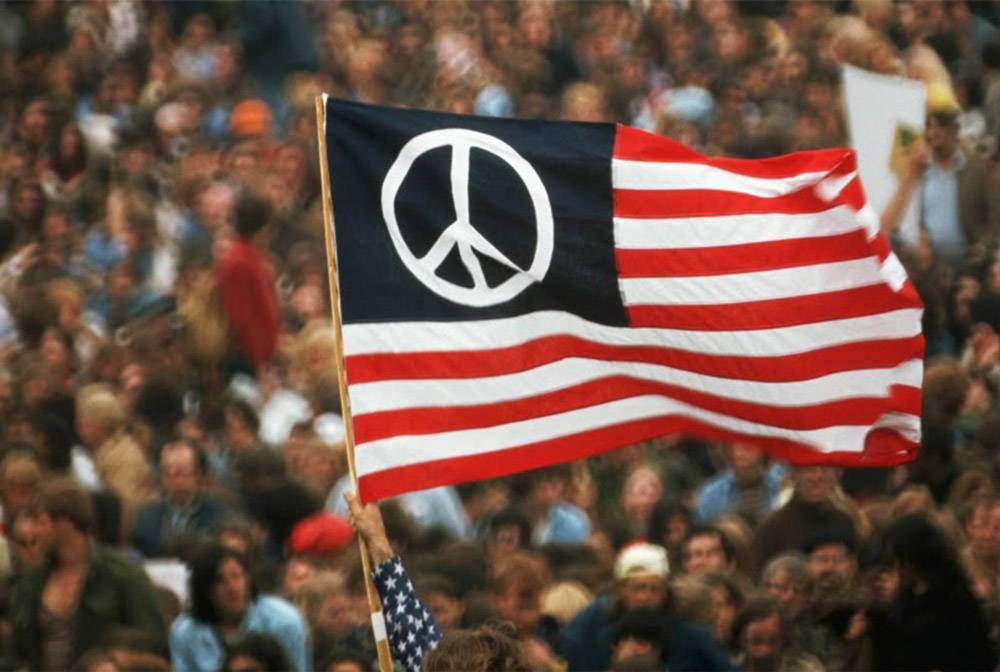 With many turning to clothing as a means of battling the juggernaut of war, protestors began to systematically reformulate public perception towards such common symbols. By subverting uniforms and emblazoning defunct military garments with peace insignia, and patches that read “LOVE”, the broader public began to see that war was not the only solution.

Through protest and the experience that many young men endured throughout their service, people began to find commonality in old military staples, seeing them as the perfect starting point for visualizing a new way of doing things. Previously reserved to veterans, imperialists, and vigilantes, the adoption of military clothing throughout much of 1960’s youth represented the birth of counterculture and a breaking down of the traditions that had only led to destruction.